Initially, as with most motorists, lies the passion for American cars and very often the purchase is due to their charisma, especially when under the hood of V8. Usually, a resident of USA is destined (and it's good) to drive a Japanese car, the domestic market is very rich in choice. But I wanted something different... not complicated and capricious Germans or boring Japanese, but American. Chrysler 300C I always liked since childhood, when I watched clipart illustrations of this car. But I never thought that it will appear in my life. I searched on drome for this particular make and model. Originally planned to look in the west, through friends. But since friends are Japanese, the sense was not much, and there were no options for me of interest. As a result, in our region was sold 2-4 300c, but the choice fell on this instance of the year 2004. Buying was simple: came - saw - drove - left the deposit - re-registered - settled and went) It was reckless not to go to the mechanics in the service, to study it - I agree. But in two years I only change oil and fill it up. 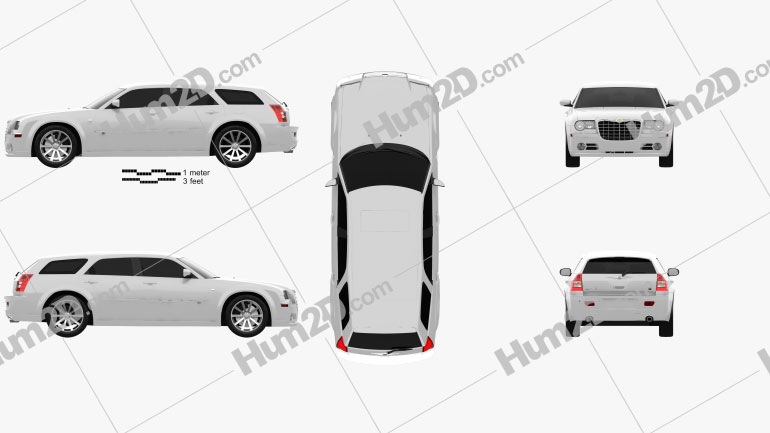 - Engine - this 300c with the Hemi 5.7 liter engine 340hp and 525 torque. The cylinder block is cast iron - simple and reliable. Two plugs per cylinder - a total of 16 pieces :) These engines are installed on the Dodge, Subaru Impreza WRX, Ram, Challenger, Charger, Magnum, Jeep Grand Cherokee, Chrysler 300c. And as we know they have no problems, at least not worldwide. The engine 5.7 has a low compression ratio, and therefore can be fed with 92-95 gasoline, but I only pour 98. In the 300s range were 2.7 liter engines and 193 hp (vegetable for its weight), 3.5 and 249 hp (the European version) and 253 (for the North American market). Also was a 3-liter diesel from Mercedes (very difficult to find, but everyone is looking for it). So, now let's move on to the normal engines - 5.7L for 340hp and 6.1L for 432hp from the SRT (fire machine)

- Interior design and its quality. In general, I was preparing for the worst :) as always stories about the oak plastic, clearance from the little finger - it's all a myth, at least in this model. Yes, on the whole it can seem a little Spartan, but in the early noughties, many had so. As for me - every is perfect, I needed a lot of space, left-hand steering wheel, nothing extra and leather).

I forgot to add that at the time Chrysler was influenced by Mercedes, you can find the turn signal knob and the same handle for windshield washer and cleaner. The automatic transmission is from Mercedes and the suspension structure is from an E-class Mercedes. It's kind of similar, but at the same time nothing will fit :) By the way, there's also the Mercedes wheel camber (where they change the angle for better turning)

In two years of use I've never had any thoughts of selling the 300c or any regrets. In the city in summer it consumes 15.5 - 18.5 liters, highway 11-12.5 liters. The Hemi 5.7 engines had an MDS feature that shuts off half the cylinders when you're cruising in quiet mode. Even taking a ride with the wind - the mark rarely went above 20 liters. Car weighs about 1950-2100 kg I can not say exactly, not weighed) All resources different information, as well as about the dynamics of 6 - 6.4 seconds to 100 km/h. Dura and enough torque to whistle from the start to leave behind a beautiful trail of tires. Sometimes I like to go on the weekend and drive with students in a Mazda CX 30 or Subaru turbo - or go up to 100 km/h, or I leave after a hundred, or even immediately. The difference is that the 300c is heavier by 300-500kg, but the 5.I point in comfort, rather than a stool and jolts like in a tank. Another huge plus is that it goes into corners as if it were afloat, why?

The width and low center of gravity and no roll. Thus, at 120 km/h, fresh Kraun-Kamri already wiggles its back and brakes - while I don't understand why we brake, because it's possible to go further :) Normally the engine uses 10-15% of its potential to move around the city, for example it needs 1500-2000 rpm to go up a hill or passes - it's commonplace. That is why sometimes you need to let it run up to 5-6 thousand rpm so it would not stagnate. But here is the flip side of it - the brakes. I won't say that it is very inconvenient to use them or they do not brake, no. But the fact that sometimes you need to think a little ahead before braking - it's yes)). SRT version 6.1 has brembo brakes, they're better, but still not enough)

What were some of the challenges while operating in Primorsky Krai? Well... Probably to find a workshop or a craftsman who will not get rid of 300c. Although the car is extremely simple, logical and without any cramps. Fortunately, the former owner advised a mechanic - who already knows this car. Parts are not expensive, somewhere even cheaper than the Japanese.